When you think about the main reason for divorce, where does your mind go? Many people suspect that infidelity is the biggest cause of divorce. But what do the statistics show? How many marriages end in divorce because of affairs? If you are in the process of going through a divorce because your spouse has cheated, know that you are not alone. There are many, many couples who have faced the same heartache that you are now facing. And even if your spouse has cheated, there are a lucky few who are able to get through the storm stronger than before. In this article, we will discuss what the latest statistics are on divorce due to infidelity.

What do the statistics show?

According to the American Psychological Association, infidelity is said to cause between 20-40% of all divorces in America. It is difficult to get the exact statistics as to how many couples get divorced due to cheating, but there are enough studies out there to allow us to reach a fairly accurate portrayal of these findings.

New research published in Science Direct found that men and women are both equally likely to cheat on one another. This is in contrast with older studies which found that men were the main culprits when it came to cheating. This same article shows that infidelity is one of the main causes of divorce.

The statistics confirm that infidelity is a leading cause of divorce. But If you have sadly felt the pain and betrayal of an affair in your marriage, does this mean that it’s over? Most of us would say yes. But there are other studies that have shown how some couples manage to come out stronger after the storm of an affair. Let’s take a closer look at why infidelity leads to divorce and what couples can do to help their marriages survive after an affair.

Why does infidelity lead to divorce?

The main reason that infidelity leads to divorce is that your spouse’s trust is completely broken. Cheating can also be a result of deeper issues in the marriage. For example, a spouse might cheat, due to being in a sexless marriage. Or they might feel a lack of emotional connection with their partners, and this, in turn, could lead them to look for love and attention elsewhere.

Once a spouse has cheated, it can be very hard to repair the broken trust. It could take years for a couple to fix feelings of mistrust and resentment. Infidelity can make an innocent spouse feel unloved and unwanted. These feelings can destroy one’s self-esteem. Some people might just want out after they find out their spouse has cheated. This is especially true if a spouse has cheated more than once.

How many couples survive an affair?

A recent survey done by The Health Testing Center polled 441 people that had admitted to cheating while involved in a committed relationship. The study found that more than half (54.5%) of these relationships ended immediately after the truth came out. Another 30% decided to try to work things out, but broke up eventually anyway. Only 15.6% of these relationships survived after an affair. These stats confirm how devastating an affair is on a relationship. It is incredibly hard to build up trust again once it has been broken.

What do these couples do to make their marriages work?

Many of these couples that decided to try to work things out ended up putting rules into place as a result of the affair. For example, the innocent mate would be allowed to look at their spouse’s phone or emails. Spending time together and having empathy for the hurt mate can also help to make the marriage work. Fixing trust in a marriage takes hard work and time. If the couple can determine what caused the affair in the first place, they will have a better opportunity to work together to fix their problems. Open and heartfelt communication is a must. This will allow couples to feel emotionally intimate which is extremely important in a marriage. Another important thing to consider is seeing a marital counselor after an affair. A marital counselor can help you vent your feelings and help you make sense of the pain that you have experienced. It can also help the mate who cheated understand why they cheated in the first place.

When it comes to infidelity, the statistics are clear; infidelity does lead to divorce in most marriages. There are very few marriages (as little as 15%) that are able to survive after adultery. But if you are in the lucky 15%, your marriage can come out stronger than ever. In some cases, it is almost as if you have said goodbye to your old marriage and hello to a completely new stronger marriage that was able to weather the storm of an affair. 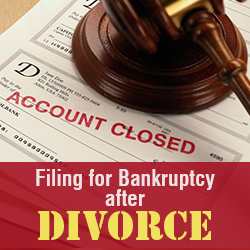 Property division and support agreements are part of many divorces. Divorce can cause serious financial burdens for ex-spouses. Filing for bankruptcy may help alleviate some of that debt. However, bankruptcy will not discharge financial obligations that you agreed to in your divorce degree. In Columbus, Ohio, family law attorneys know that spouses often threaten to file for bankruptcy.

TITLE 11. BANKRUPTCY § 523 of the code provides:
A discharge under section 727, 1141, 1228(a), 1228(b), or 1328(b) of this title [11 USCS § 727, 1141, 1228(a), 1228(b), or 1328(b)] does not discharge an individual debtor from any debt such as those related to domestic support obligations; to a spouse, former spouse, or child of the debtor and not of the kind that is incurred by the debtor in the course of a divorce or separation or in connection with a separation agreement, divorce decree or other order of a court of record, or a determination made in accordance with State or territorial law by a governmental unit unless—

(A) the debtor does not have the ability to pay such debt from income or property of the debtor not reasonably necessary to be expended for the maintenance or support of the debtor or a dependent of the debtor and, if the debtor is engaged in a business, for the payment of expenditures necessary for the continuation, preservation, and operation of such business; or

(B) discharging such debt would result in a benefit to the debtor that outweighs the detrimental consequences to a spouse, former spouse, or child of the debtor

Your divorce decree might order you to make payments to your spouse in exchange for property. You can’t wipe these out if you file for Chapter 7 bankruptcy but, if you file for Chapter 13, you can usually roll them into your payment plan. With a Chapter 13 bankruptcy, you give your trustee your extra income each month, after you pay your necessary bills, and the trustee distributes this money among your creditors, including your ex-spouse. At the end of your Chapter 13 plan, if you still owe money to your ex-spouse, that portion of the debt is usually eliminated.

You May Still Have to Pay Joint Debts

If you have to pay certain debts as part of your divorce decree, you might think about filing for bankruptcy to wipe them out. Your creditors can’t come to you for payment if you file for bankruptcy after your divorce, but they can still look to your ex-spouse for payment of debts you signed for together. An ex-spouse who has to pay these debts even though the divorce court ordered you to do it can usually take you back to divorce court. Often, the court will order you to pay her back – or you’ll end up paying the debts anyway.

When emotions are running high, you may find it difficult to restrain your words and think about the long-term consequences of your behavior in an adversarial divorce. Constructive divorces and separations do exist, and constructive divorces lead to … END_OF_DOCUMENT_TOKEN_TO_BE_REPLACED

PLEASE NOTE: Editorial (op/ed) commentary are the author's personal opinions only, and not necessarily those of other Daily Properties columnists or this publication.
Follow my blog with Bloglovin